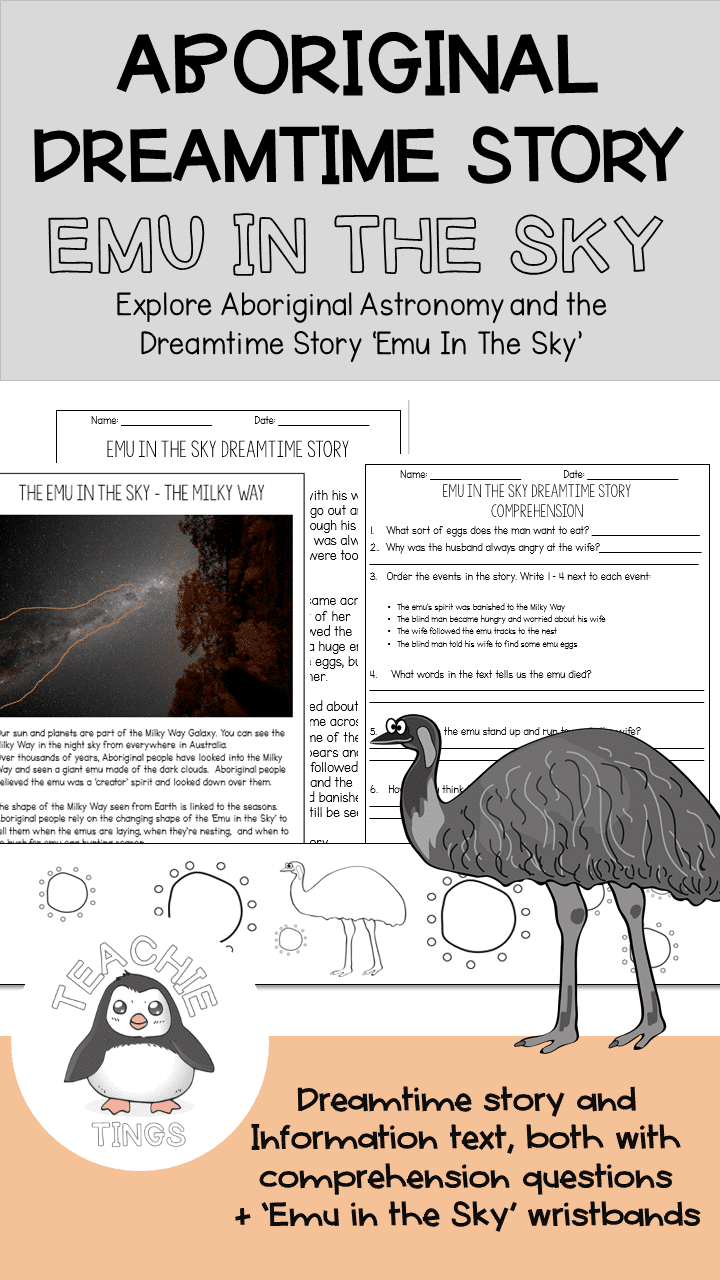 Were Aboriginals the world’s first astronomers?

Aboriginal Astronomy is fast becoming an area that our students want to know more about. Through Dreamtime stories, Aboriginal science is becoming more mainstream, and it is our job as educators to be able to share this knowledge.

Aboriginal Astronomy in the Australian Curriculum

In the Australian Curriculum, an understanding of Aboriginal Astronomy is a suggested teaching elaboration. However,  I found trying to find information or aboriginal astronomy stories on this topic to share with my young students was a challenge. Most information was in a news format, and still needed a teacher’s touch to make it digestible for young readers. This is such a shame because the stories are truly fascinating.

The Emu in the Sky

The Emu in the Sky is a Dreamtime story that explains how the giant emu shape came to be in the sky. In modern science, the Milky Way is the galaxy that our sun and solar system are a part of. The movement of the Milky Way has been watched over thousands of years by Aboriginal people all over Australia. Its location in the sky is linked to when emus are laying eggs when they are nesting, and when they are ready to hunt. The emu shape is created by the black clouds (not the bright constellations – as in much of Western science).

I found myself drawn into the Dreamtime story, and every snippet of information about aboriginal astronomy that I could find – my students found it equally as fascinating. It’s just a shame we are at school during the day and can’t see the emu in the sky and during lesson time.

Next time you are outside at night, see if you can find this magnificent piece of Aboriginal history and astronomy.

Try some of our Aboriginal Astronomy Resources:

We use cookies on our website to give you the most relevant experience by remembering your preferences and repeat visits. By clicking “Accept”, you consent to the use of ALL the cookies.
Cookie settingsACCEPT
Manage consent

This website uses cookies to improve your experience while you navigate through the website. Out of these, the cookies that are categorized as necessary are stored on your browser as they are essential for the working of basic functionalities of the website. We also use third-party cookies that help us analyze and understand how you use this website. These cookies will be stored in your browser only with your consent. You also have the option to opt-out of these cookies. But opting out of some of these cookies may affect your browsing experience.
Necessary Always Enabled
Necessary cookies are absolutely essential for the website to function properly. This category only includes cookies that ensures basic functionalities and security features of the website. These cookies do not store any personal information.
Non-necessary
Any cookies that may not be particularly necessary for the website to function and is used specifically to collect user personal data via analytics, ads, other embedded contents are termed as non-necessary cookies. It is mandatory to procure user consent prior to running these cookies on your website.
SAVE & ACCEPT

We noticed you're visiting from France. We've updated our prices to Euro for your shopping convenience. Use United States (US) dollar instead. Dismiss